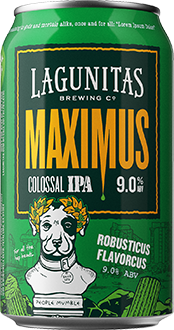 There is a tide in the affairs of big IPAs, which posits that a flood of hops leads to a fortune in liquid. In Lagunitas' 25+ years of brewing big IPAs they've learned this to be mostly true, with one big caveat: balance is everything. And Maximus is exactly that. Maximus Colossal IPA is kinda like the brewery's flagship IPA on steroids. Brimming with pine, grapefruit and berries on top of floral, spicy, dank notes, the exotic hop character leads to an assertive hoppy burst. In short, hops on hops. Lagunitas brought their OG brew into the modern era, breaking new territory with their only 9% beer in distribution. They make a lotta 8-percenters and people love 'em, but 9 is louder, so why not?! This updated West Coast double IPA will blow the minds (and tastebuds) of the modern DIPA connoisseur.